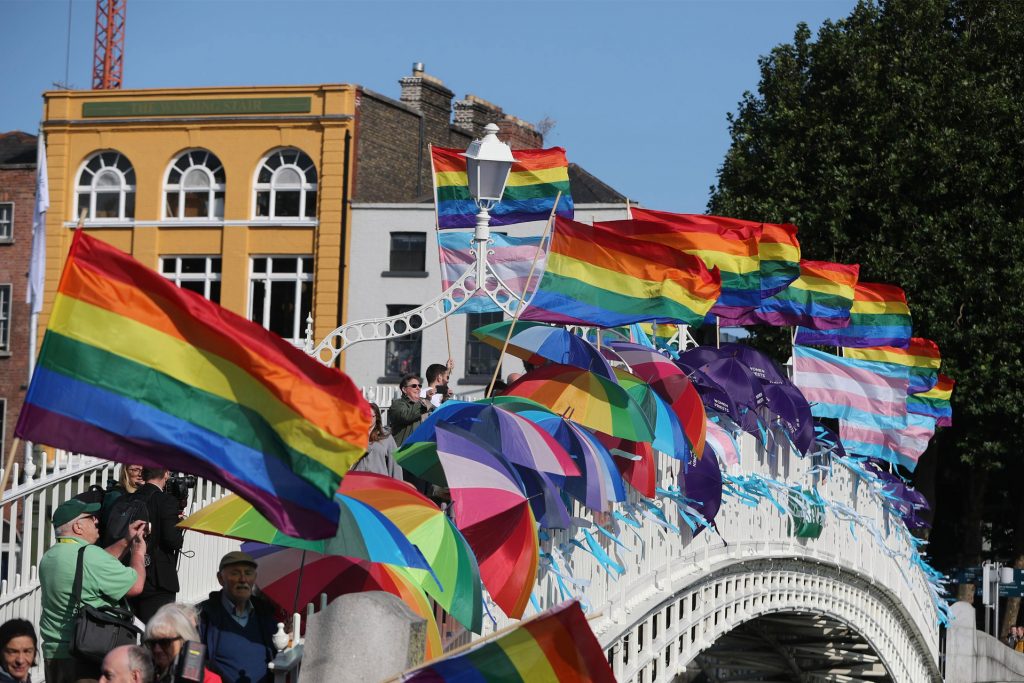 It is the month of June and Dublin has become a riot of colour, with rainbow flags festooned all over the city – welcome to Dublin Pride 2021!

Pride is a worldwide event and has been taking place now for some 50 years. The origins of Pride begin in the Stonewall Inn in Greenwich Village, New York. This institution was popular with members of the LGBTQ+ community, but was the subject of aggressive police raids over the years as homophobic legislation forced it to operate clandestinely. The police raids finally escalated into riots in June 1969, from which Pride was born, as an act of protest and a call for acceptance. The event has grown steadily in prominence and importance since then.

Actor Ian McKellen, famed for Gandalf in The Lord of the Rings, was (and indeed still is) a prominent gay rights campaigner and the founder of the Stonewall charity in the UK. The rainbow flag, perhaps the most colourful flag in the world, is the symbol for the movement, and was designed by Gilbert Baker. It was first flown in 1978. The very name, ‘Pride’, is a call to members of the LGBTQ+ community to not be ashamed of who they are, but to uphold their self-respect and love their differences.

Origins of Pride in Ireland

The first Irish Pride march was held in 1974 where ten men and women picketed the Department of Justice and the British Embassy in Dublin – this was an act of protest against regressive laws that were then being introduced which criminalised homosexuality. The British Embassy was chosen as a protest site because the law in question – the Offences Against the Persons Act – dated back to British rule and the Victorian era.

A much larger-scale event then took place in 1983, also as an act of protest, following the homophobic killing of a young man, Declan Flynn, in Fairview Park in 1982. The march ran all the way from Stephens Green to Fairview Park, and may have helped change a lot of minds and alter perceptions. Over the years, understanding grew and grew, thanks to the tireless work of trend-setting activists, such as Senator David Norris, a leading campaigner for gay rights in Ireland.

Things have, on the whole, become a lot more tolerant since 1982, though of course there is still some way to go and much work still to be done. LGBTQ+ life in Ireland has improved dramatically, especially following the 2015 marriage referendum which finally legalised marriage between two members of the same sex. This was seen as a major triumph for a new, more inclusive Ireland, to say nothing of the election of Leo Varadkar, Ireland’s first openly gay Taoiseach (prime minister).

Dublin is now considered one of Europe’s most gay-friendly cities, along with the likes of Berlin and Barcelona. The George was Dublin’s first prominent gay bar, but other venues have since sprung up around the city. Pantibar is located near ISI’s English language school on Meetinghouse Lane, and is a particularly notable LGBTQ+ establishment. Outhouse resource centre on Capel street is another notable gay venue near ISI, with a cafe and various services available.

Things to do and see in Dublin Pride 2021

On Saturday 26th June, the Dublin LGBTQ+ Pride parade shall be held, with this year’s theme being that of ‘Community’. Owing to the still-ongoing Covid restrictions, the event this year will be largely virtual and digital. There are plenty of other live events taking place this year however, including a free exhibition, Where Pride Starts, chronicling the history of the Dublin Pride March and Parade. This will be running until 16th July at the Stephens Green Shopping Centre.

The National Gallery of Ireland is also running a month-long exhibition, looking at artworks in their collection through the lens of Lesbian, Gay, Bisexual, Transgender, Queer, Intersex and Asexual (LGBTQIA). This new perspective will bring to light many stories that have been hitherto unknown or ignored. Tonie Walsh will be hosting The Lavender Walk, billed as being the original queer walking history tour of Dublin. This will take place on weekdays. The Museum of Literature Ireland (MoLI) will also be hosting Past/Present/Pride, a series of talks with influential literary figures such as Emma Donoghue and Colm Toibin.

All these and many more events are taking place this year under the banner of Dublin Pride 2021. Join in this celebration of community, tolerance and acceptance. Fly the rainbow flag high and proud!