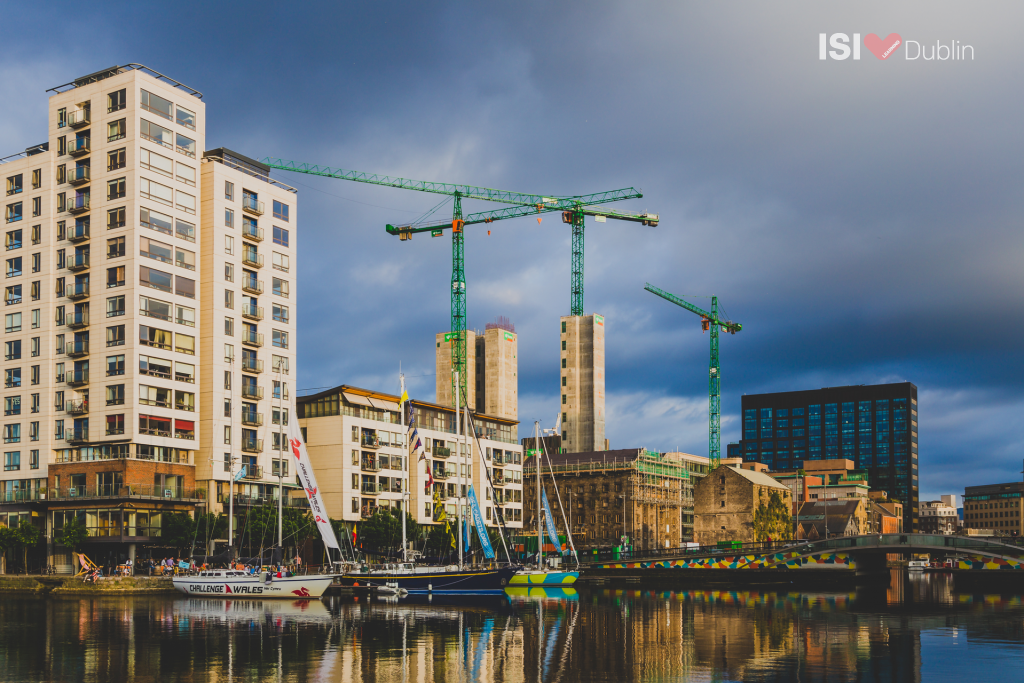 Any ISI student looking to take a break from studying English in Dublin can do little better than heading down to Grand Canal Dock!

Grand Canal Dock is one of Dublin’s most attractive and glamorous locations, though this was not always the case. The docks were first opened in 1796, but rapidly went into a period of decline and by the 1960s the area was almost completely derelict. Around 1988, the process of regeneration began, picking up speed in the earlier 2000s, and since then the area has transformed into one of Dublin’s prime ‘hot spots’.

It is now considered one of Dublin’s most desirable places to live, and there are many tower blocks with penthouse apartments. Powerful multinational firms such as Google, Twitter, Facebook and Linkedin have their Dublin offices there, to the extent that the area has been ironically nicknamed ‘Silicon Docks’, in reference to Silicon Valley in the USA.

Grand Canal Square, completed in 2008, is a notable place to sit by the water with a coffee or a bun. The large red decorative poles light up at night and provide fantastic illumination. The area is well equipped with coffee shops, pizzerias and other restaurants so there’s no shortage of eateries to cater to your needs.

Notable buildings around Grand Canal Dock include the Marker Hotel, the Millennium Tower, Bord Gais Energy Theatre, the former Boland’s Mill and the Alto Vetro apartment building. The Bord Gais Energy Theatre has been the site of many famous and long-running stage shows and musicals over the years. The Millennium Tower, at 63 metres in height, was for a long period the highest building in Dublin.

The Grand Canal Dock area is also a great place for birdlife – numerous swans are often to be seen elegantly gliding by on the water and large colonies of seagulls are always to be seen. You may also sometimes see a dark cormorant on the hunt – they dive deep down into the water in search of fish, and can hold their breath for an impressive period of time. As you sit by the water, you may also notice smaller pied wagtails and speckled wrens darting between your feet.

Water sports are popular on Grand Canal Dock, and in the summertime rowing clubs for children are popular, with groups meeting up at the Wake Dock. Sometimes you will even see people in wetsuits swimming in the water – hopefully they’ve all had their tetanus shots! All in all, it’s a fabulous and idyllic place to meet up with your friends after work, and to watch some glorious sunsets over the water.

So if you’re an ISI student looking to take a break from studying English in Dublin this summer, look no further than Grand Canal Dock! It’s a must-see and you won’t regret it. Have fun and enjoy!